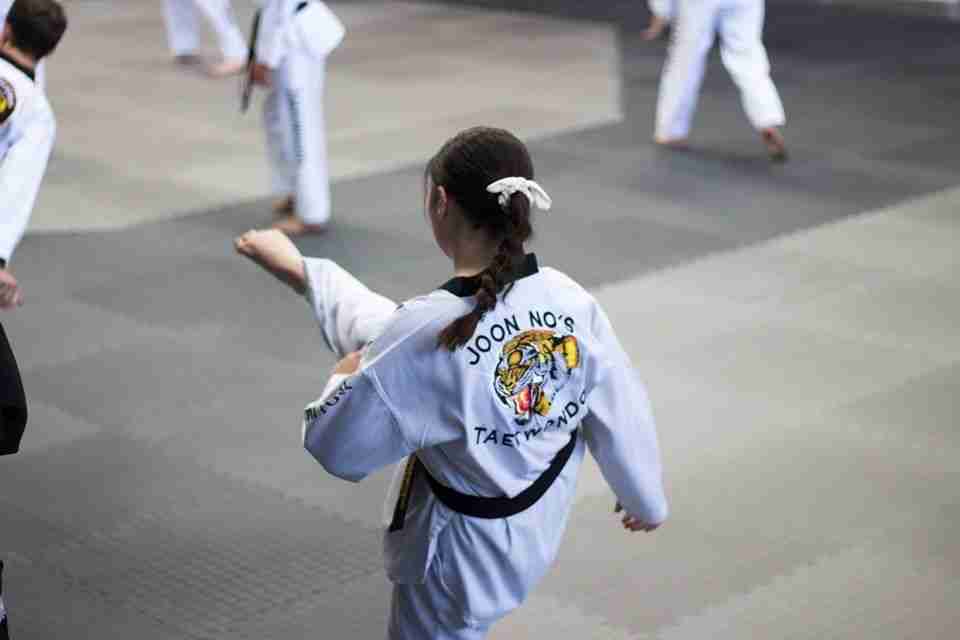 2 points better: a lesson from the Dojang.

We all seek performance improvements – we all want to do better.  However so many people are looking the ‘wrong way’.  As I was teaching a class of teens Taekwondo this week, one exercise I did with the group really demonstrated how true this is.

We were preparing for an upcoming grading, when students will have to perform what they have learned in front of the ninth Dan (Degree) black belt Grand Master.  The group were at varying belt levels, and we were focusing in on really honing some of the basics to help them perform at their best on the day.

As a group, they performed the most basic ‘pattern’ (in Karate they call it a Kata, in Taekwondo it is known as a Poomsae) – essentially it is a formalised and sequenced set of attacks and defences done without opponents.  After their initial attempt at this pattern, I asked the class to close their eyes, and raise both hands above their heads.  They were to self rate themselves on their performance, without looking at what other people were rating themselves at.

Lesson one:  They all performed the same skills, however some performed those skills better than others.

Lesson two:  The way they rated their performance was entirely individual.  Some of the ‘better’ performers gave themselves lower scores than those who performed it more poorly.

If you apply this to the workplace, every person has different levels of physical and cognitive skills and experience, and every person will ‘judge themselves’ differently.  It can be useful when you are seeking to increase performance, to think about what skills are ‘missing’ or could be developed, to help drive performance.  Further, the way that people self-assess is highly individual, and working to increase performance can be undermined by missing out on the connection to where people belief they are at.  If someone does a great job but thinks that they do poorly, then the language and framing of enhancing performance has to be completely different to working with someone who is technically poor but thinks that they are outstanding.

Next, I invited the group to consider the score out of 10 they gave themselves, and asked them ‘how specifically’ did they choose that number?  What was good or not so good in their performance?

Lesson three:  Self evaluations become more valuable the more specific you get.

Consider when people in the workplace use the ‘halo effect’, duration neglect and narrative bias (and many more cognitive distortions) to evaluate something holistically – as all good or all bad – when in truth, the specifics are what we should be paying attention to.  The individual or team may have done some things brilliantly, and other things poorly.  When we know what these are, we can help drive performance improvements by doing more of what went well, and intervening where things were done poorly.

Lesson four:  Imaging what it would be like to behave differently often unlocks the capability to do so.

Lesson five:  People are often OK with small increments of change, but will respond negatively to massive leaps

In the workplace, using stories, metaphors, language of possibility and even post-hypnotic suggestion can help people set a frame of performing differently.  By knowing where the person is at, it is possible to make the step small enough to be achieved, but big enough to matter.

Back to the Dojang and I next made a few suggestions about what they could focus on in their performance.  In this case, I pointed out areas to think about including their accuracy, their attitude, their timing, their transitions and their co-ordination.  As they imagined these things, each student was taking different ideas with them from what I was suggesting.

After praising the change in performance, I then asked them how it felt, what it was like, to perform at that level?  I asked them what it would be like to set that as a new benchmark?  The teens commented how fantastic, strong and powerful it felt to perform like that.   There was strong agreement that they wanted to do that all the time.

All of this leads to the most important lesson of all:

Lesson seven:  The performance improvement came from inside.

Not one of these students was given any additional technical training, external skill or extrinsic reward for their efforts.  All of the improvement came from within each student, as they found what they needed to find to improve their performance.  In the workplace, it is worthwhile remembering that we ‘unleash’ performance from within people, we don’t do performance ‘to’ people.

I’m sure these young martial artists will do a fantastic job at their upcoming grading.  Their dedication and efforts will certainly pay off.

How are you inviting the very performance out of your individuals and teams?

Want to know more?  Contact Phil Owens, Performance Partner.  See how he can work with you, your teams, and your organisation to bring agile performance to a whole new level.  Because better is only the beginning.


Is it time to fight your biggest enemies?
Entitled or earned?